Places of Cultural Interest and Museums 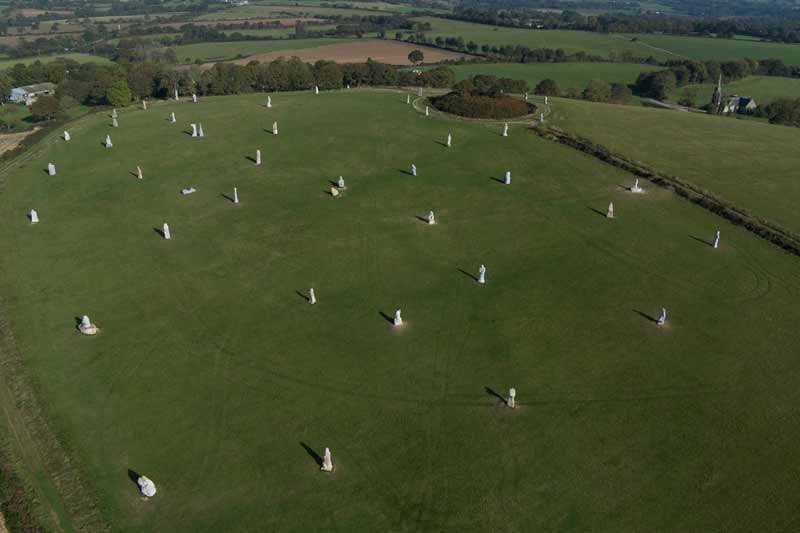 Valley of the Saints, Carnoet:

The Valley of the Saints is actually an ancient feudal mound on which stands 100 giant granite statue, over 4m tall,  of the Saints of Brittany.  More are being added all the time and you can watch the sculptors carving new statues in the outdoor working area. The statues look out over a stunning landscape with views as far as the Monts d'Arree mountains. In the summer there are guided tours and entry to the area is free.

Valley of the Saints is only 5mins by car or a nice walk from the cottage.

Huelgoat means "High Wood" in Breton and is located high in the Parc d'Amorique  on the shore of a lake. On the edge of village is a green, mossy rock strewn forest that has inspired both Arthurian and Christian legends. There are enjoyable walks in the forest which can take you to places of interest such as Arthurs Camp.  There is also an arboretum, nice restaurants and a cobbled square at the centre of the village.

Huelgoat is 20mins by car from the cottage.

A beautiful small town best known for its association with the post-impressionist painter Paul Gauguin. A lovely small river runs through the village down to a port area. There is a Museum, lots of galleries and some nice restaurants.

Pont Aven is about 1hr 15mins drive from the cottage.

Quimper is generally regarded as the cultural heart of Brittany. The town is known for its cathedral, museums, atmospheric old quarter but most of all for its annual festival celebrating Breton Culture. The Musee Breton and the Musee de Beaux Arts have excellent collections of artefacts and paintings.

Quimper  is about 55mins drive from the cottage.

The Ville Close is a lovely old stone fortified town with a few narrow streets filled with shops and restaurants. You can walk around the ramparts for a lovely view of the surrounding area.  Near the entrance is the Musee de la Peche, Concarneau is France's 3rd most important fishing port. The town itself has some great sandy beaches and has a lively maritime festival each August.

Concarneau is about 1hr 30mins drive from the cottage.

This world famous site features alignments of almost 3000 Menhirs (large stone megaliths) up to 13 rows wide and stretching for more than 4kms.  The stones were erected between 5000 and 2000BC by Neolithic Civilisations. This site is a model of monumental architecture unequalled in Europe.

Located  at Carnac about 1hr 40mins drive from the cottage.

The Grand Menir Brise is an enormous broken granite block which would have stood 21m tall and weighed 300 tonnes and is the largest known Stele in Europe. The Er-Gras Tumulus and the Table de Marchands dolmen are extraordinary testaments to the funerary rites practised in Brittany by Neolithic Civilisations.

Located  at Locmariaquer about 1hr 40mins drive from the cottage.

At the summit of the Kernelehen peninsula which dominates Morlaix bay sits a unique monument dating back some 6000 years; the Great Cairn of Barnenez. This Neolithic burial place, the largest in Europe, is composed of 11 dolmens and slabs of granite weighing several tons.

Located at Barnenez about 1 hours drive from the cottage.

This is an immense dry stone structure of which over 10,000m3 is still standing. It was built between 4,700 and 3,200BC so pre-dates Stonehenge and the Pyramids by 2000 years. It is situated on a rocky headland overlooking Quiberon Bay in the Gulf of Morbihan.

Places of Cultural Interest and Museums

A roundup of local Brittany places of cultural interest and museums

Luxury Holiday Cottage in the heart of beautiful Northern France

Our tiny farm is beautifully situated in the peaceful hamlet of Trevenec close to Carnoët and La Vallée des Saints in Central Brittany. It has stunning views over the surrounding countryside and the Foret Dominiale de Freau. We have small flocks of Shetland and Lande de Bretagne Sheep which lamb in spring and early summer. The sheep provide a variety of natural coloured fleece for spinning into yarn. Our goats are pets and are very friendly; we also have free range hens which provide fresh "tasty" eggs for us and our guests.
© Copyright 2018 - BrittanyFarmHolidays.com - All Rights Reserved

Drop Us An Email: